Saturday, Troy called me and he his voice confirmed what he told me and he was sick. So I was gearing up to lead and thinking about how to handle leading the Well, since I was scheduled to play drums.

Well, in the end I got to co-lead with Troy all day and led I led “I am Free” for the opener. It was fun doing it. However, it’s weird not playing an instrument. I have to figure out what to do with my hands.

Also, it was cool because I called Craig Kackley, the new Youth Pastor at Crown Pointe (Congrats), to play drums at the Well and he tore it up. So I had Jordan and Craig together for the evening service. I’m so proud of those guys… tear.

There was funny during the 10 o’clock service: Troy forgot the penny whistle that he started Be the Center, which actually was really cool. A hard rock interlude with a penny whistle solo. Good touch. But when we got to the song, the pad was setting the song up and Troy says in the mic, “There’s no good way to cover this, but I forgot something.” He then runs off the stage and sprints back on out of breath with the penny whistle.

It was a good breaker though. The people really opened up and began to worship after that. That was the only mis-hap of the day and a funny one at that. Jared also had Troy all wireless so he was able to get off stage and on without disconnecting his guitar.

We put the words on the large center screen with a motion background for the worship, which was cool. So we had full IMAG the entire worship service. Watching it this morning was cool. The people really responded well. 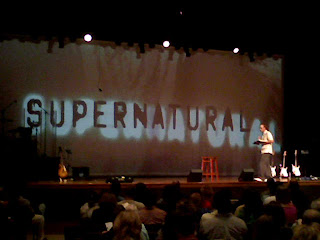 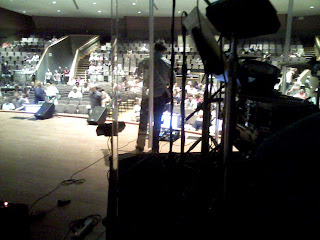